Who’s hungry? At Suffolk New’s Chef Whites restaurant, we pride ourselves on being the perfect go-to for every occasion. From three-course Christmas extravaganzas to themed evening events or just a quiet lunch to catch up with a friend, this is the place for you! 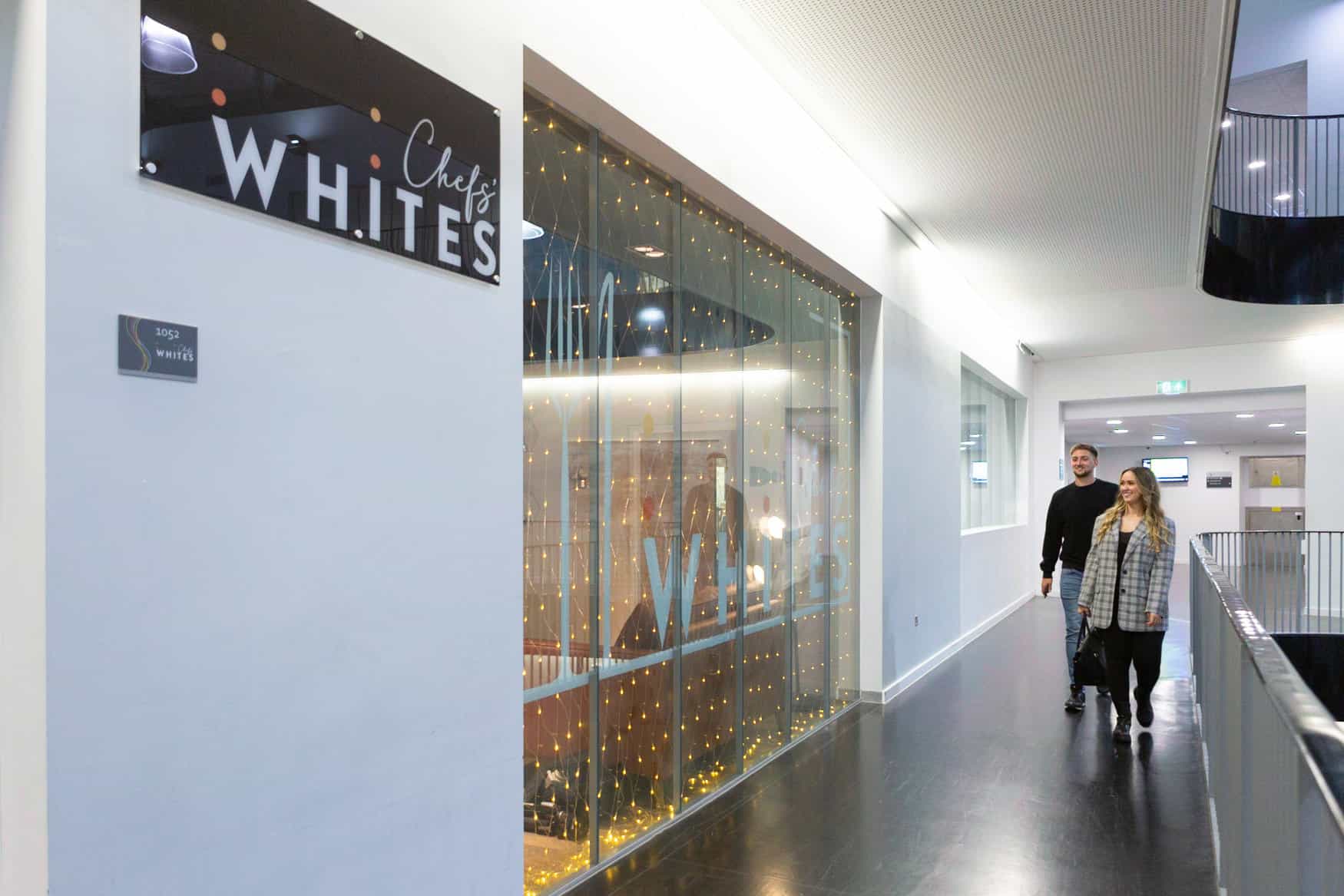 SNC proudly presents our modern and vibrant cooking and dining facilities hosted by our incredibly talented students. We aim to provide our customers with the best, offering a unique dining experience that you won’t receive anywhere else in town through affordable, high-quality food and outstanding service.

Upon arrival, you will be escorted to your table by one of our lovely staff members, who will then take your drinks orders and offer you a jug of water for your table. Our staff will then take your food orders and leave you to relax and enjoy the comfortable surrounding as you wait for your meal. Those interested can even watch their meal preparation from the comfort of their table, as we have multiple screens linked directly to the kitchen area that allows customers to watch as our students prepare their food.

We offer a wide selection of meals and drinks from our menus, from traditional foods to themed meals and seasonal-style dishes (such as our Christmas lunch). We offer a variety of meals within each menu, including vegetarian, vegan, gluten-free, and dairy free. Dietary requirement alterations are available upon request, and all potential allergens are listed. For other enquiries, our staff are available to discuss queries or concerns. 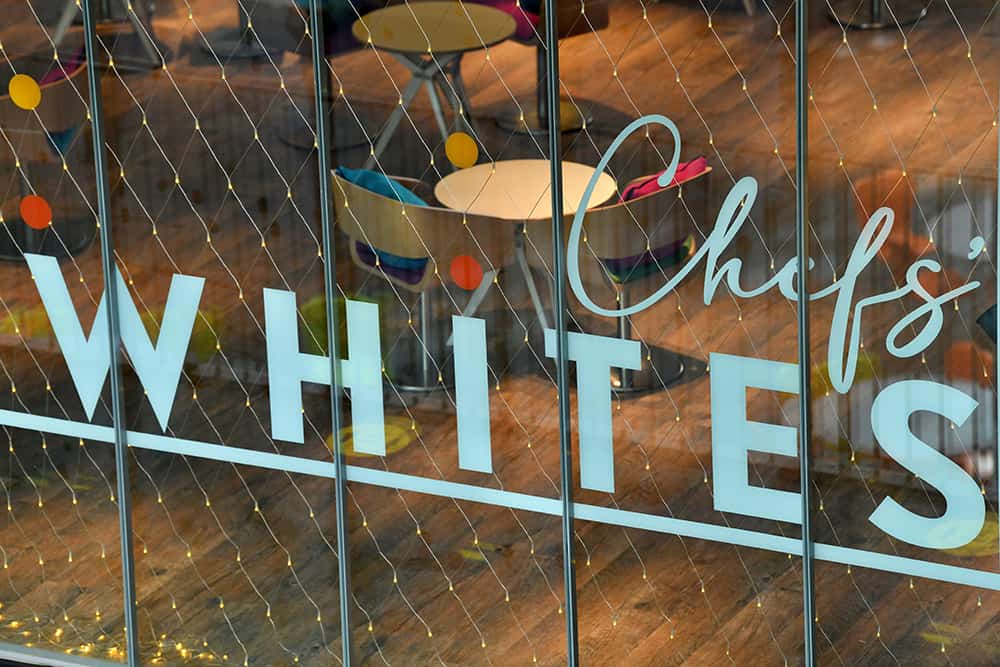 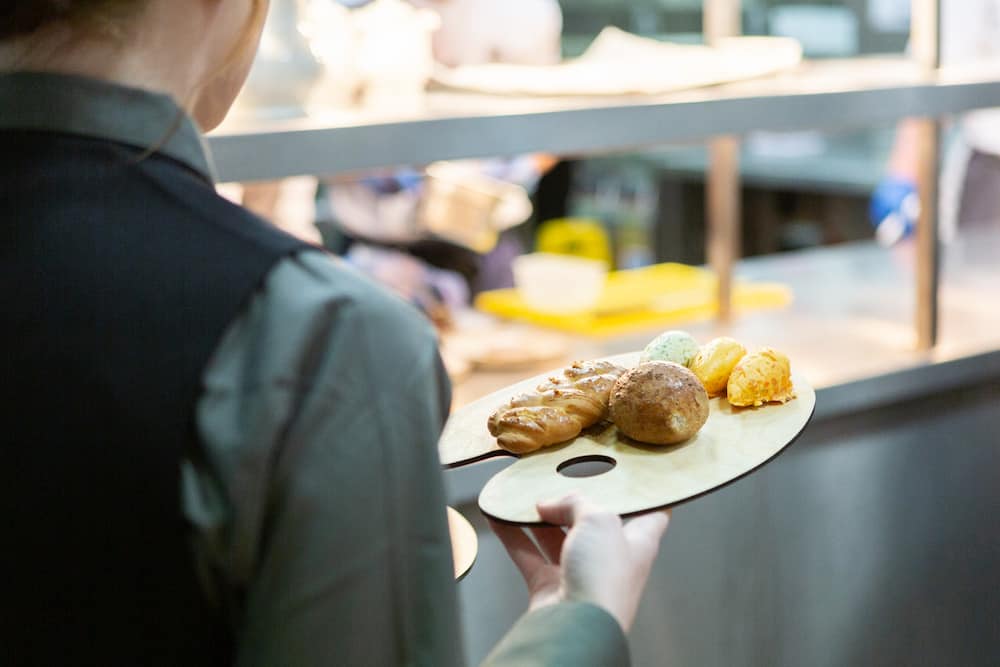 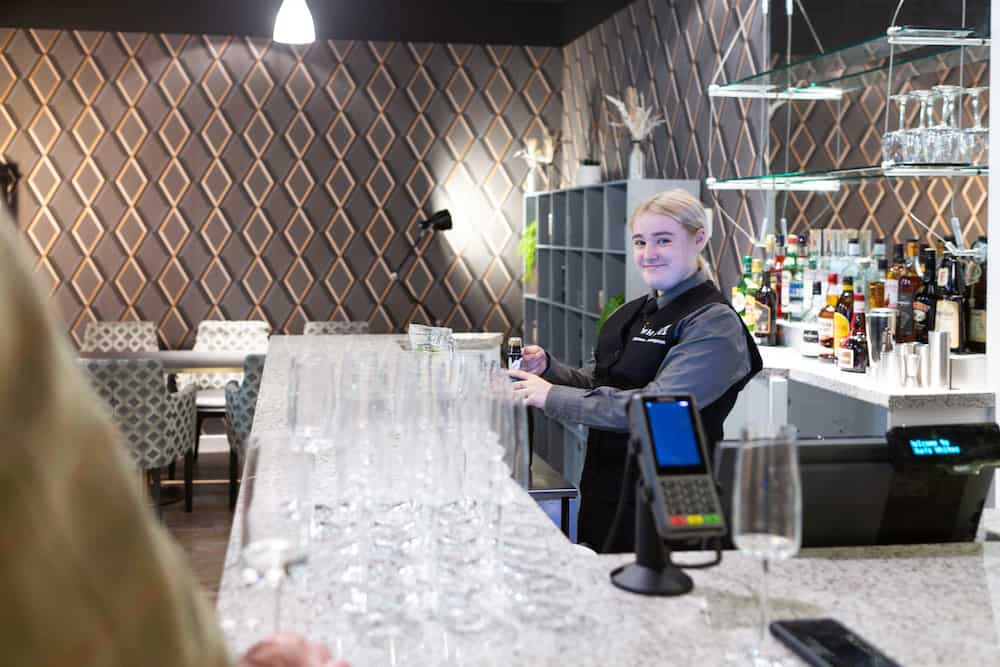 Use the buttons below to view our current menus, times and prices. 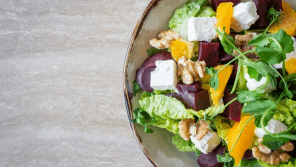 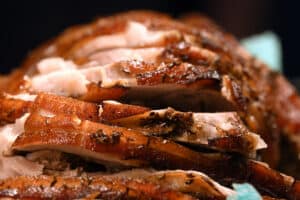 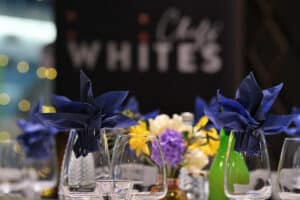 Keep an eye out for our popular theme nights. Booking is essential to avoid disappointment! 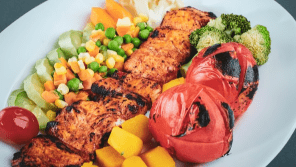 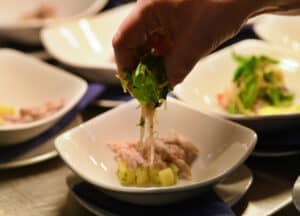 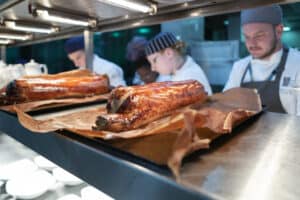 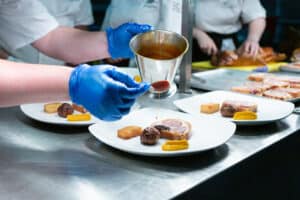 Take a tour of our stunning environments

This is a modern, vibrant, inspiring learning environment developing the Catering & Hospitality professionals of the future. It is our aim to deliver a unique dining experience hosted by our students.

Previously Shelly’s Restaurant – the only thing that has changed is the new name – still the same great quality food and service.

Take a tour of our Restaurant 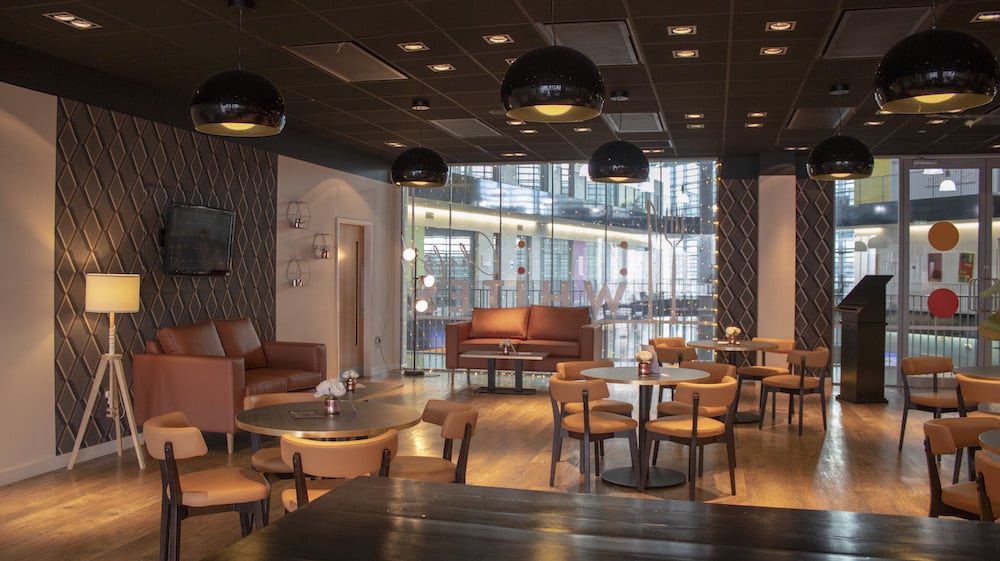 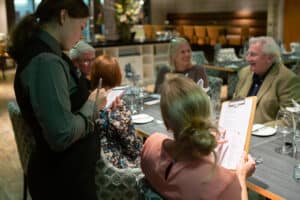 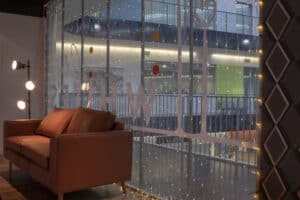 This is a modern, vibrant, inspiring learning environment developing the Catering & Hospitality professionals of the future. It is our aim to deliver a unique dining experience hosted by our students.

Previously Shelley’s Restaurant – the only thing that has changed is the new name – still the same great quality food and service.

Take a tour of our Kitchen 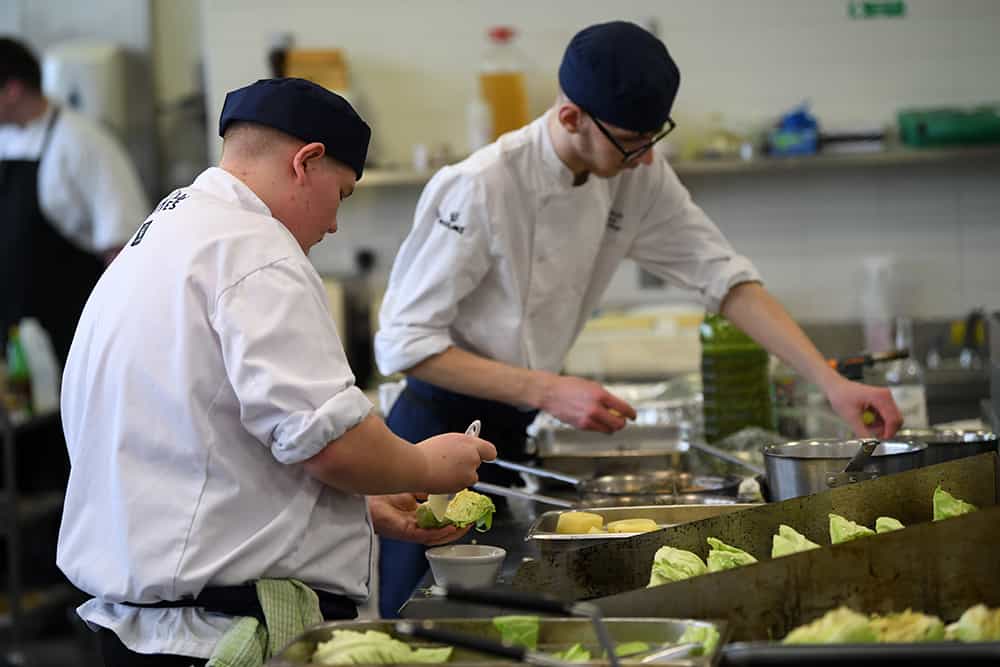 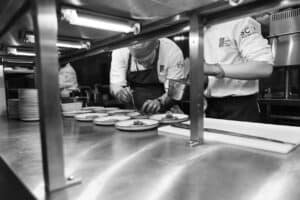 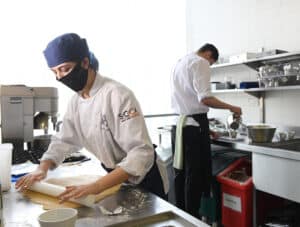 For large group booking of 6 or more, you may be asked to complete a pre-order form along with full pre-payment required for Christmas meals. Please email chefswhites@suffolk.ac.uk for payment link which secures the booking and is non-refundable.

Restaurant parking is available at Rope Walk and Grimwade Street. You can park there free of charge as a restaurant guest if there are spaces in the College’s car parks. Any chefs’ whites guests who park in the College car parks before 6:00 pm must register their car details with our main reception upon arrival. (We ask that you not to park at the university car park as this is not associated with SNC, and you may incur a fine). 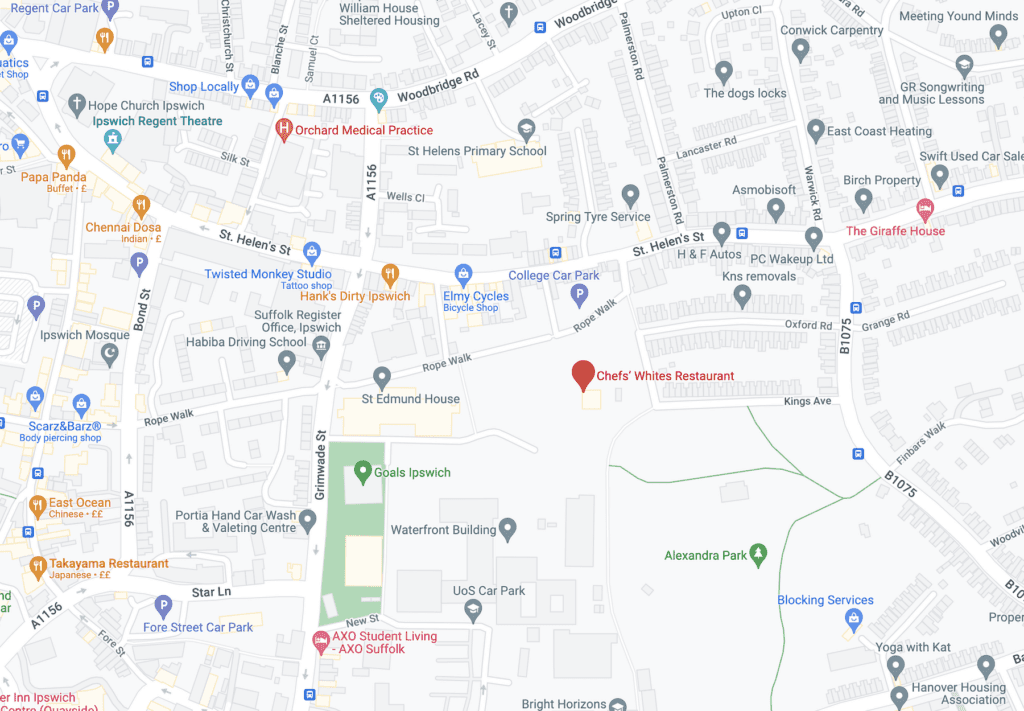 Whilst the bowler hat goes hand in hand with the world of banking, whites are as important to a chef as a football boot is to Lionel Messi.

The history of the signature uniform worn in the kitchen by culinary experts the world over, started with a hat that was otherwise known as a Toque.

From small hats – big aprons formed – and white coats came to prominence in the kitchen during the nineteenth century, thanks to the French chef, Marie-Antione Carême.

It was popularised in the UK by Carême’s compatriot, Auguste Escoffier, who worked at The Savoy and The Ritz in London during the late 1800’s and early 1900’s.

Since then, chef whites have been on the sartorial menu of the kitchen ever since.

Whilst many people believe the colour was chosen to highlight cleanliness in the kitchen, whatever the reasons behind its invention, getting your chef whites is a rite of passage for all hopeful Hestons and optimistic Olivers.

Whites are an integral part of a chef’s uniform and that is the reasoning behind Chefs’ Whites, the new name of the restaurant and home of the Suffolk Centre for Culinary Arts – based at Suffolk New College in Ipswich.

Director of Service Industries, Mike Mulvihill, said, “Chefs’ Whites and our Suffolk Centre for Culinary Arts will provide the very best training to some of the future stars of the industry.

“Everyone who studies with us will get the chance to work with some amazing chefs and industry big hitters both locally and nationally, all with the eventual aim of helping their progression.

Enjoyed your dining experience? Please leave us a review!

We appreciate receiving any feedback or comments and welcome you to share your experience by leaving a review on TripAdvisor here. 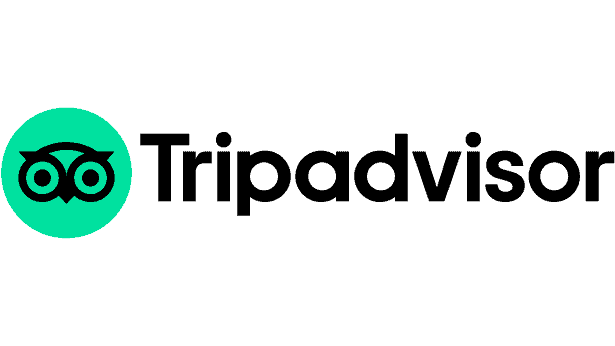